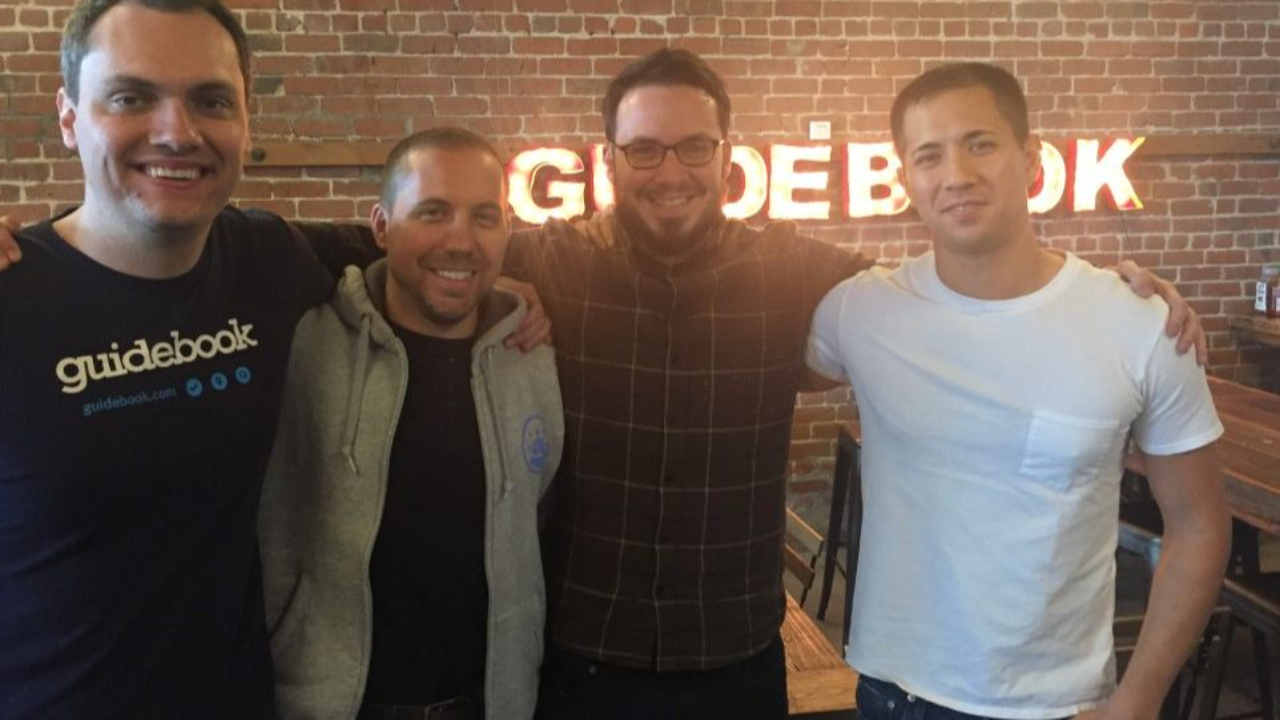 (Kevin, Me, Pete and Jeff circa 2015 at our 1 Zoe Street address in San Francisco)

I spend most of my time with founders, CEOs, investors and sales leaders that either want to progress from founder-led sales, or want to move upmarket into the enterprise or both!

The best founders want to move upmarket for good reason. Typically they have built a strong product-led growth business targeted at smaller businesses, but see application at scale in larger companies.

But it’s not always the way. Sometimes they sell to larger companies but have not made themselves core to their customer’s business, or their application is pointed in a direction that provides less value than if it pointed a few degrees elsewhere.

In my last 3 firms, I operationalised this move successfully, but all were very different scenarios, and I want to break down some of the key facets that made those moves upmarket possible.

This is the 2nd of a 3-part series and looks at how we successfully grew Guidebook from $2m to $15m ARR by adapting our go-to-market approach and processes.

Guidebook was and still is a mobile app platform that enables non-technical people to build and deploy a mobile app for an event of almost any kind, for example: a large conference like a trade show, a medium-sized conference like a sales kick-off, a small series of events such as University open-days, or even one-off private events like weddings.

When I turned up at Guidebook, founders Jeff, Kevin and Pete had built what looked like a well-oiled machine in their home territory of the US.

I fell in love with the product, the culture and frankly the founders. They were (and still are) super cool guys, who have a first-principles mentality that I deeply connected with.

However, once I got in and looked under the hood I observed some immediate big challenges that we’d have to overcome:

The attitude of the leadership team is always critical to any first VP of Sales in overcoming the inevitable challenges on the startup growth journey.

Jeff (CEO), Kevin (VP Eng) and Pete (VP Product) were childhood friends from Palo Alto, and each had what I still believe are perfect complementary skills sets - business, engineering, design/product, and they shared a similar attitude:

There was no ego in their attitude, just humble inner confidence that they had a vision they wanted to play out because they saw a gap in the world that they could fill.

It wasn’t money-motivated either, it was utility motivated and that was truly inspiring to me, and the basis upon which I think the greatest companies are built upon. Money however would be the inevitable bi-product, of course.

The other thing that was obvious was this: they loved their team, and they deeply trusted them to do their jobs. Micromanagement was not in their DNA.

When I agreed to start Guidebook internationally out of London, Jeff gave me some simple advice… …use whatever resource we can provide you from the US, but do it your way, just keep me updated!

It was such a liberating attitude. He deeply trusted me to just get on with building!

It was obvious to me from day 1 that we’d have to immediately diversify our customer type in Europe.

I wasn’t even sure we could be categorised as a SaaS company because our revenue recurred but somewhat sporadically, which made it look like we had high churn.

So I immediately started to prioritise targeting corporate events of all sizes with a goal of having Guidebook used at 12 events per customer per year rather than 1 per year.

This would have multiple impacts, the biggest of which was that we could build a meaningful relationship with multiple stakeholders on a continuous basis throughout the year, and more accurately predict whether the revenue was likely to recur months in advance - like a typical SaaS company.

Now we were targeting large corporations that ran multiple events per year, it stood to reason that if one department bought from us, many others would, especially if they attended an event and had a good experience using the app built on our platform.

This was critical because our product was new and disruptive so the strategy of landing and then expanding our relationship post the initial sale made a ton of sense to me, and I wanted to lean into that.

Additionally, from experience I knew that whilst early-stage growth is fueled from net-new revenue, sustainable growth ultimately come from expansion within the existing customer base in most SaaS plays.

Related to #1, now the product was used on a higher frequency throughout the year we were getting 12 attempts versus 1 attempt to prove some kind of ROI, which significantly improved our chances of avoiding customers churning.

Churn is a killer for any company but especially a SaaS company where a good proportion of the revenue growth was expected to come from the install base.

If the install base is shrinking then your model is pretty much screwed!

Now at least we had significantly more control of churn, and that was critical.

It always makes me nervous if a company has an annual subscription to a software product, that is sold top-down and they are isolated low down in an organisation, with multiple layers separating them from the true economic buyer and strategic decision-makers.

At Guidebook, I wanted to find ways to adjust our narrative so that senior decision-makers (VP level and above) were aware of and involved in the relationship with Guidebook.

I remember an early discussion with executives at Centaur Publishing who ran a series of events across their publishing portfolio.

The event planners went into detail about much time and money they spent on printers, and how many challenges they faced in both communicating to event attendees and adjusting things like event schedules last minute.

It was obvious that a digital platform like Guidebook could revolutionize how they managed their whole event portfolio. Impacts like this get the C-suite interested in talking with you. And that’s also when you see ACVs rise exponentially.

Measuring ROI on a $5k investment at a large trade show, where the paper was still being deployed alongside our digital product was close to impossible. That’s what our US team was faced with.

However, when we were used at smaller and higher profile corporate style events as we were focused on in EMEA, the courage of the event organiser to remove paper was stronger, and the audience was much more appreciative of the digital experience alongside the live event and very vocal about their feedback.

So whilst it remained difficult to prove ROI for the event use case, anecdotally it was easier to justify and this showed up as our churn numbers were stronger in EMEA versus the US.

Our tiny office in London found ourselves closing deals significantly above the average ACV of $5k. Corporates would be prepared to pay $50k+ for an annual package of events.

Improving churn was not difficult as we were targeting corporates in EMEA. We were not dogged with situations that the US team were faced with like trade shows being run once every two years for example.

Our differentiated ICP in EMEA meant the profile of our customer leant itself better to renewals and upsell.

We had already successfully begun to diversify into Universities in the US and had followed their lead in EMEA, however in targeting corporates we were flooded with ideas from our customers about how our product could be applied to new use cases, and this was pivotal for the future of the business.

Because our product was an intuitive self-serve platform, we discovered our corporate clients using Guidebook in a variety of creative ways we hadn’t thought of, from a mobile intranet to health and safety repositories to using us for factory tours.

In the 5 years that followed we grew from $2m to $15m in ARR, and diversified out of pure events into higher ed and most recently we launched a new brand focusing specifically on supporting corporates to manage health and safety in an industrial environment - that brand is called ReadyKey and routinely sells subscriptions for >$100k

The success we were having in Europe led to me and my family moving to San Francisco and running sales globally as Chief Revenue Officer in January 2017, where I stayed until early 2020.

When Jeff and I first met, he gave me a choice - bootstrap in Europe and get a much bigger stake in the company, or take some VC money and take a lower stake and get paid more.

Even though he was CEO, I joined him on some investor pitches and he really made me feel like taking the VC term sheets we were offered was as much my decision as the founders.

His trust and attitude were fundamental to both our successful working relationship, my personal happiness and ultimately Guidebook’s growth.

For anyone looking for their next gig, potentially as a VP of Sales or Chief Revenue Officer, the way Jeff managed me and our relationship really is the blueprint - he absolutely nailed it, and so did Kevin and Pete.

Search for founders like Jeff, Kevin and Pete folks.